Watching a film is a lot like dreaming. A good film creates an immersive fantasy that we forget is not real–much like a dream. As we are unaware of how active our mind is while we dream, so the filmmaker works ferociously behind the scenes to create a seamless sensory tapestry.  As the architects of these celluloid dreams, we must strive on both a creative and a technical level.  Only in the union of these two disciplines is the viewer transported into living worlds, emotions, sensations, and thoughts that formerly only dreams could provoke.

We are a film and video production company dedicated to providing individuals and businesses a unique opportunity to tell their stories in the most all-encompassing and incredible way possible through digital cinema! We do everything from corporate marketing film and business promotion content to legal and medical videos to website and YouTube commercials.

Since the beginning, we have been providing our clients with the perfect combination of creative artistry and technology. Our talented team of professionals are experts at featuring our clients’ products, services, places and people in the best light.  We produce stunning photos and outstanding film and video.

This film celebrates 50 years, the golden anniversary of a well know St Louis based business.  S-R Corporation and the St Louis Film Production team worked on the project with Mr. Robert the company founder to create the film within a three month period.  Over six locations were filmed in St Louis Missouri and Arkansas and Tennessee.

For historical perspective scenes were re-created in our spacious studios and at S-R production locations.  In addition we also shot footage at Ford and General Motors plants in Detroit.  Since S-R is a number one provider of automotive parts in North America, the team also decided to incorporate the success of the end customers as well.

Many older historical images were camera captured and given movement in the editing suite creating the ‘Ken Burns’ film movement visual effects.  This was most helpful in creating the drama of the film in the company’s early years.

Mr. Robert and top executives were filmed on location and in the studio.  Numerous other employees and vendors were also requested to be filmed at the studio with a green screen to help in the technology look and feel of the film.

Overall the full film was over one hour long, a much shorter clip is shown above and offers the viewer a sampling of our fine film. 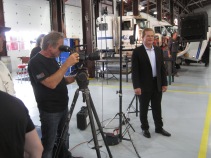 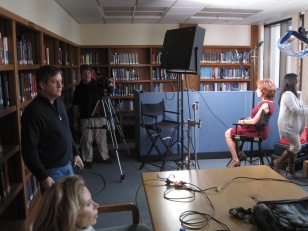 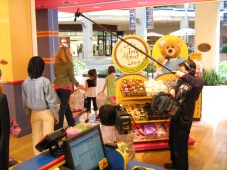